Case in point: USA Today‘s front-page piece on Monday (9/14/20) with the remarkable headline, “With 50 Days Till Election Day, Voters ‘Anxious,’ Wary of Trump, Biden Alike.” On the web, the headline ran: “‘Anxious, Fearful, Angry.’ At 50 days Out to Election Day, Many Voters Are Wary of Both Trump and Biden.” 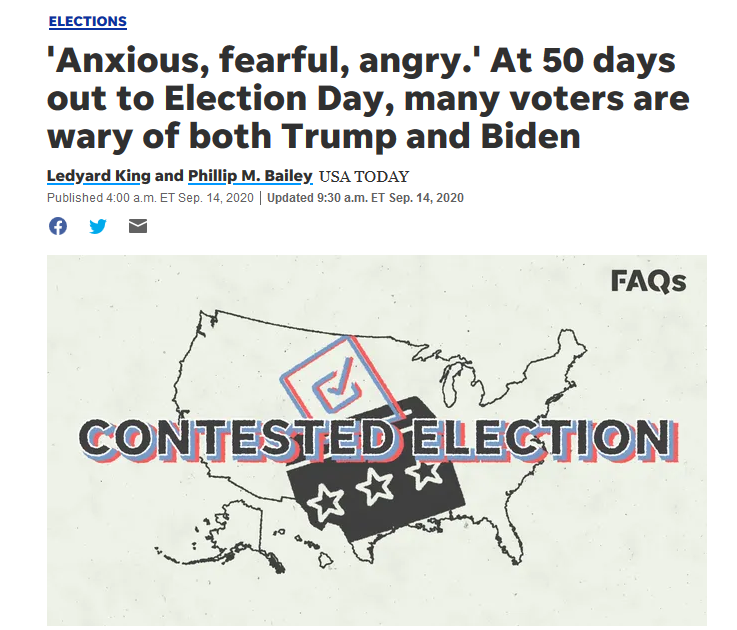 USA Today‘s headline (9/14/20) elides a key difference between the two candidates: Generally, more people like Biden than dislike him, which hasn’t been true of Trump since January 2017.

“It’s 50 days until voters cast their ballots for president, and Americans are on edge,” the article, by Ledyard King and Phillip M. Bailey, began:

It’s not just that they have been cooped up at home to avoid a deadly contagion. Or that some downtown areas have been wracked with unrest fueled by protests over police violence and racism. Or that Americans are facing financial hardships because of the pandemic. Many voters view the White House race between President Donald Trump and former Vice President Joe Biden as crucial to America’s future. But while the president’s supporters are more enthusiastic than Biden’s, many voters grappling with multiple crises are unimpressed and uninspired by the choice they will face on November 3.

This framing clearly implies that there’s no clear answer at the voting booth for “many” people; the headline directly suggests that “voters” are equally wary of both candidates.

No one disputes that there is an enthusiasm gap between Trump and Biden supporters. But the idea that the choice seems like a toss-up to most people, and that the general sentiment in the country is one of equal wariness toward both candidates, is much harder to defend. Biden’s favorability ratings have consistently been much higher than Trump’s, and Biden has led national polling averages by a minimum of 4 percentage points (currently he’s averaging almost 6 points ahead) for the last several months. And while anxiety does dominate this election year, Biden supporters are much more anxious than Trump supporters—which is hardly surprising, given Trump’s clear efforts to subvert the election (FAIR.org, 9/15/20). 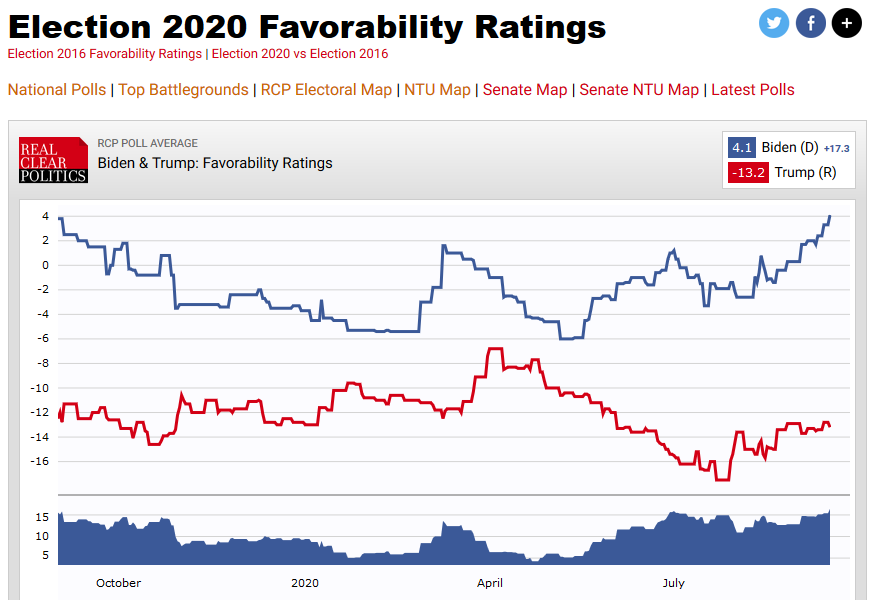 It’s misleading to describe voters as being equally wary of these two candidates (Real Clear Politics, 9/17/20).

You get a hint at the problem with the article in the line about protest: Are Americans on edge because there has been unrest in some downtowns—or because of the conditions of police violence and racism that have spurred that unrest? USA Today seems to be talking about a particular kind of reaction, had by a particular subset of people.

It’s misleading to describe voters as being equally wary of these two candidates (Real Clear Politics, 9/17/20).

And in fact, despite referring to “Americans”—and the slightly narrower “voters”—multiple times in the headline and first few paragraphs, the article soon reveals that it’s actually talking about neither of the above. The anxiety referred to in the headline, it turns out, comes from a characterization of voters in swing states who voted for Barack Obama in 2012 and Trump in 2016—not exactly a representative group.

The paper then offers quotes from several “undecided voters” from swing states that they interviewed, including such statements as, “I can’t with good conscience say that I have an educated enough decision to vote either way. You constantly have to filter through the fighting to hear what they’re actually trying to say.” The reporters return to that voters’ words to conclude the piece: “Hopefully, we’ll hear more about what they actually plan on doing [in the debates]” she said. “And less about how much they hate each other.”

Interviewing undecided voters is one of journalists’ favorite election season pastimes. It’s not an irrelevant angle, though corporate reporters tend to overemphasize the white, conservative-leaning and rural swing voter to the exclusion of other crucial groups that might decide the election (FAIR.org, 5/20/14). But you have to wonder if people would remain so undecided if news media used more front-page real estate to cover candidates’ plans than to publish uninformed opinions about those candidates.

And it’s important that the obsession with swing state voters—while, again, justified to some extent, because of the way our Electoral College makes many voters’ opinions largely inconsequential—doesn’t so cloud reporters’ judgment that they use those voters to stand in for “Americans” as a whole. By doing so, outlets like USA Today overstate Trump’s support and create the impression of a balance that doesn’t exist.